Apple Pay Will ‘Change’ The Way You Purchase From Vending Machines 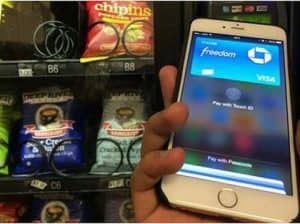 Though there are a few different mobile payment services that are available on the market today, Apple Pay is undoubtedly the most widely used and the one with the highest potential. This is thanks to the fact that it is built into the hundreds of millions of iPhones that are sold in the United States alone each year. For those unfamiliar, mobile payment is a relatively new type of technology that allows you to pay for goods and services not using cash or even a credit or debit card, but through information stored on your smartphone, tablet or similar type of device.

In theory, mobile payment and traditional plastic credit and debit cards really aren’t all that different. Account information is stored on a magnetic strip on the back of your credit card, which is then read by a card reader at the register when you check out. Necessary information about the payment is sent to your bank, at which point the associated account is debited. Mobile payment operates almost identically, only instead of storing information on a card it’s stored digitally on your phone. Instead of being transmitted through magnetic tape, it is sent to the point of sale via near field communication, or NFC. This is also much more secure as a phone can be used with certain biometric sensors, passwords and other features that cards can’t utilize.

This move will allow users all over the United States to use Apple Pay at over 200,000 different self serve locations. This is a huge benefit for Apple Pay in particular, as it is facing steep competition from other mobile payment services like the Google Wallet. CurrentC is another competing technology that is just on the horizon that already has the support of some of the biggest companies on Earth, like Walmart. The addition of near field communication and Apple Pay compatible to vending machines in particular benefits nobody more than consumers, however, as they now have one less reason to carry cash, coins or even credit around with them if they don’t want to.

If you are interested in updating your machines, but would prefer a more concrete payment method, consider installing our Greenlite vending machine card readers.