Would Your Purchase a Drink From an Alcohol Vending Machine? 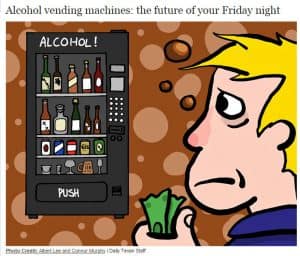 Texas has a standing reputation for promoting and starting some of the biggest ideas in the nation. Texan ideals often have roots in business and encouraging the growth of society; however, a recent proposal to introduce alcohol vending machines, as told by Eleanor Dearman, is causing a controversy in the Lone Star State. The idea of a drink vending machine is not uncommon, but an alcohol vending machine sounds difficult to control. To fully grasp how this would work and affect Texans, you must understand how the vending machines would function and how concerns over it would be addressed.

Currently, clubs and bars check photo IDs at the door or when purchasing alcoholic beverages. In many cases, patrons are given a bracelet, which identifies minors from those above the alcohol-consuming age of 21-years-old. An alcohol vending machine would function on the premise of these bracelets. Those of legal drinking age would be given a bracelet by facility staff, which would allow them to obtain drinks from the vending machine. This ensures underage minors do not obtain alcohol from the machine. Furthermore, the machine would limit the number of drinks a person may obtain. For example, two drinks of liquor, 30-ounces of beer, or 10-ounces of wine. However, alcohol vending machines face much more criticism.

Although the facility staff will be responsible for issuing the bands allowing access to the alcohol vending machine, the problem of bracelet changing becomes an issue. What is to stop someone from obtaining a bracelet, which he or she then passes along to a minor? Immediately, this sounds like it will prevent alcohol vending machines from ever being installed. However, something similar occurs every day in alcohol-providing entities on the planet. Someone of legal drinking age could purchase a drink and provide it to a minor.

Some drinks may contain on a combination of five or more ingredients, and the alcohol vending machines do not currently have this capacity to produce such mixed drinks. Mixed drinks are extremely popular among college students, and the lack of mixed drinks could adversely affect a business’s profits for a single night of use.

As society has grown more comfortable with the idea of vending machine use across many industries, the alcohol industry stands on the edge of a new frontier. Only time will tell how the public responds to alcohol vending machines, and they may be an instant hit for those wanting a simple drink quickly. Will ordering drinks be as simple as pushing a button each time you go out in the future?